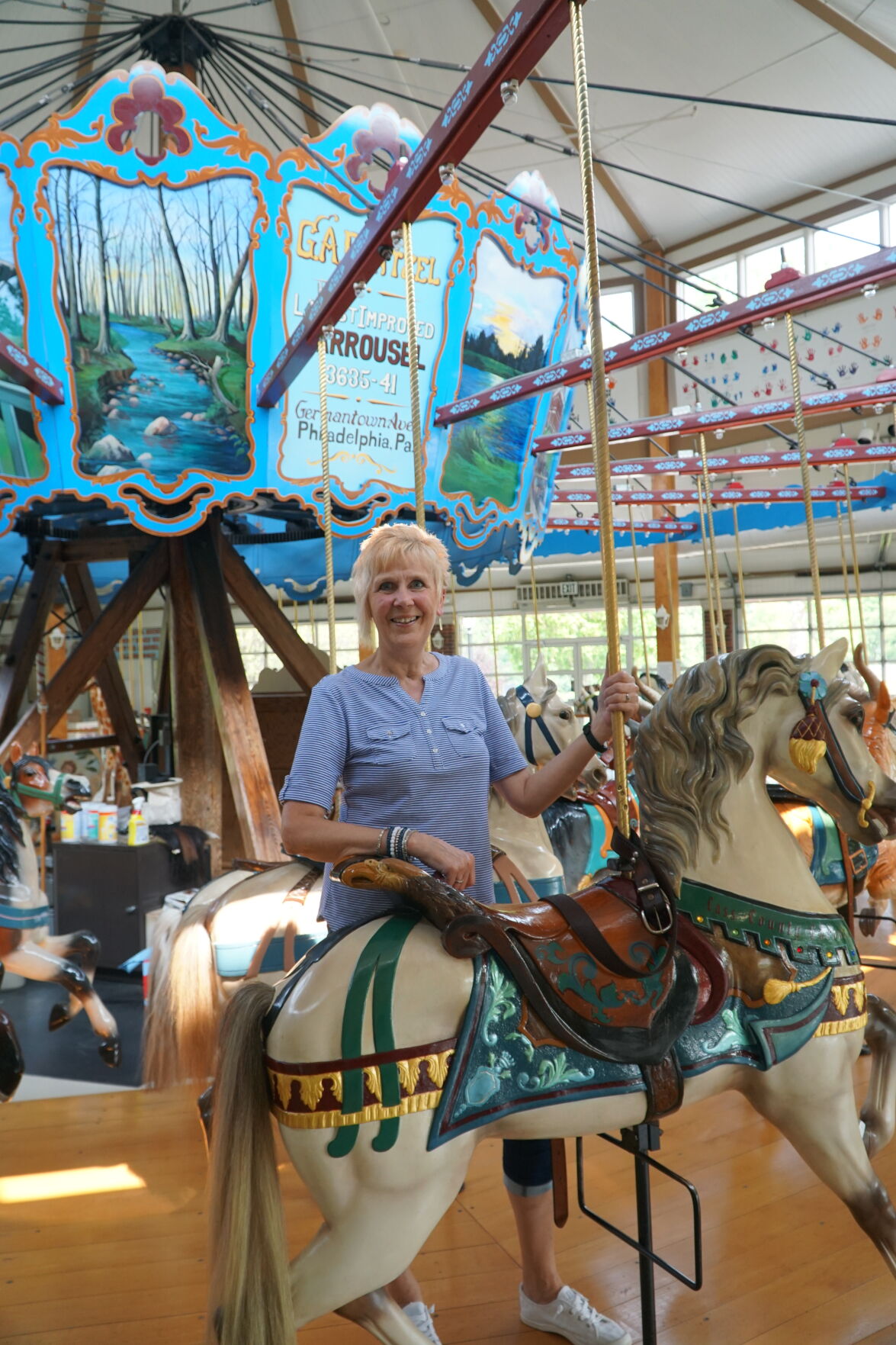 Linda Baldwin of the Dentzel Carousel Committee stands with Princess Logan, the lead horse on the 102-year-old carousel. The Carousel Fun Day festival will return in this year. 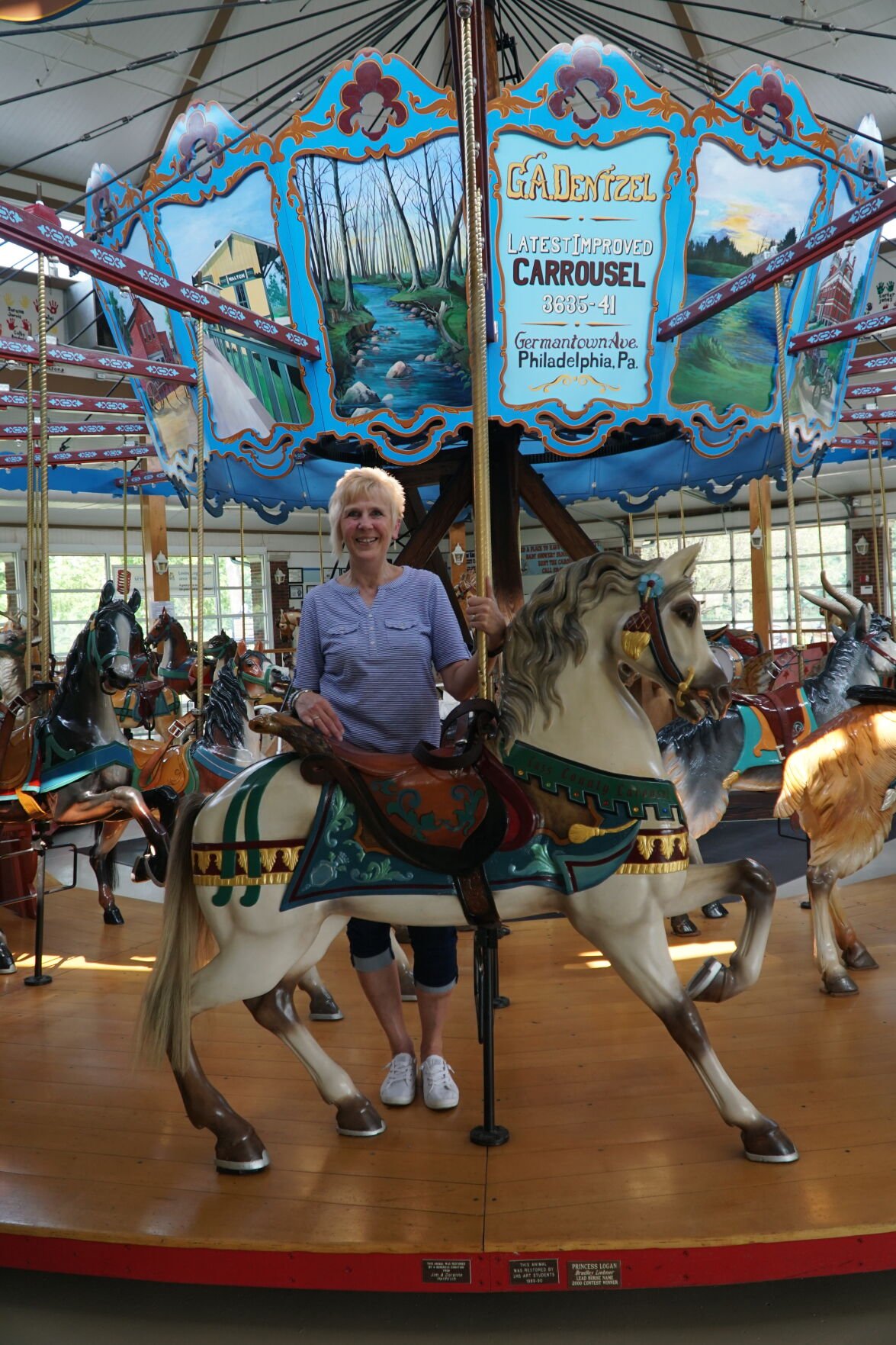 Linda Baldwin of the Dentzel Carousel Committee, stands with Princess Logan, the lead horse on the 102-year-old carousel. The Carousel Fun Day festival will return in this year.

Linda Baldwin of the Dentzel Carousel Committee stands with Princess Logan, the lead horse on the 102-year-old carousel. The Carousel Fun Day festival will return in this year.

Linda Baldwin of the Dentzel Carousel Committee, stands with Princess Logan, the lead horse on the 102-year-old carousel. The Carousel Fun Day festival will return in this year.

Logansport’s Carousel Fun Day is returning to Riverside Park this year, bigger than ever and retaining the same name.

They had only a few months instead of a full year to plan it after Gov. Eric Holcomb lifted social distancing requirements in the spring.

“The day itself never went away,” said Linda Baldwin, chair of the Festival Committee. “We were just going to call it a different name because of our reputation of being huge.”

But the once-planned smaller event is now expected to be the largest event the group has hosted since the day began in 2016.

Vendors almost immediately began contacting the committee about being part of the festival after Holcomb lifted the order.

“They’re anxious to get back into things,” Baldwin said. “It just all came together. It’s going to be a full park of activity.”

The committee members wanted to have some sort of event because the festival is also a fundraiser for the carousel, and the pandemic had affected the operations of the Dentzel Carousel, one of two surviving ones in the United States.

Even the daily operations, such as hosting private parties or birthdays, didn’t happen.

“We were shut down,” Baldwin said. “We could not do anything here.”

The festival will include entertainers, craft booths and food booths — more than ever before. New attractions this year include a caricature artist, a barbecue ribs and chicken vendor, a new sound system for the Dentzel Carousel and a dunk tank.

Mayor Chris Martin is managing the dunk tank, and Baldwin said it will have well-known local people, including politicians and people from different walks of life. There’ll be a schedule of who’ll be in the tank at what hour so people can try to dunk their favorites.

There will be some other changes. There won’t be a car show this year because of work being done in Riverside Park.

However, other favorites will be there, and the special events, such as the ventriloquist, the magician and the Peru circus performers will perform twice so people can experience it all.

“It’s meant to be full of activities so that you don’t want to leave and miss anything,” Baldwin said.

Elsa and Anna from Disney’s “Frozen” will be there again this year, the Fresh Mind Band will play twice and 13 craft booths will be set up. The festival will also have miniature golf, cornhole games, carousel train rides and face painting again, as well as more.

Some things are a bit changed, including the laser tag attraction, which will be run a bit differently.

The Human Fuse from 2019 has been “replaced” by a human cannonball act that will also have an aerial act included.

“You have to come see what we’ve got,” Baldwin said. “It’s too hard to list them all.”

Also returning will be the free shuttle rides from the parking lot of the former Marsh Supermarket on 14th Street.

This year, the festival will go on, rain or shine, said Baldwin.

They may need to adjust some things, but “the show will go on no matter what,” she said.