LIVESTREAM: Gov. Holcomb to speak at 2:30 this afternoon 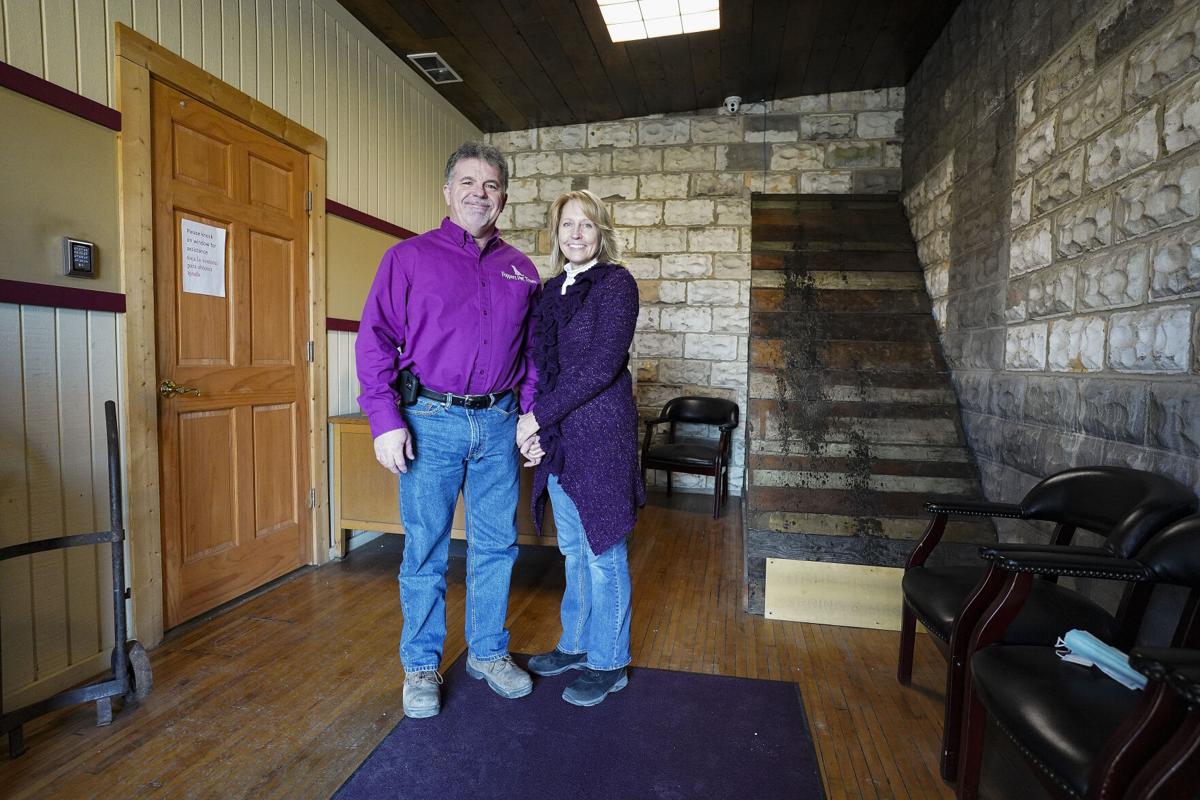 Michelle and Clark Leffert, owners of Foppers Pet Treats Bakery, pose at one of their production sites on Wednesday, Jan. 20, 2021, in Logansport. 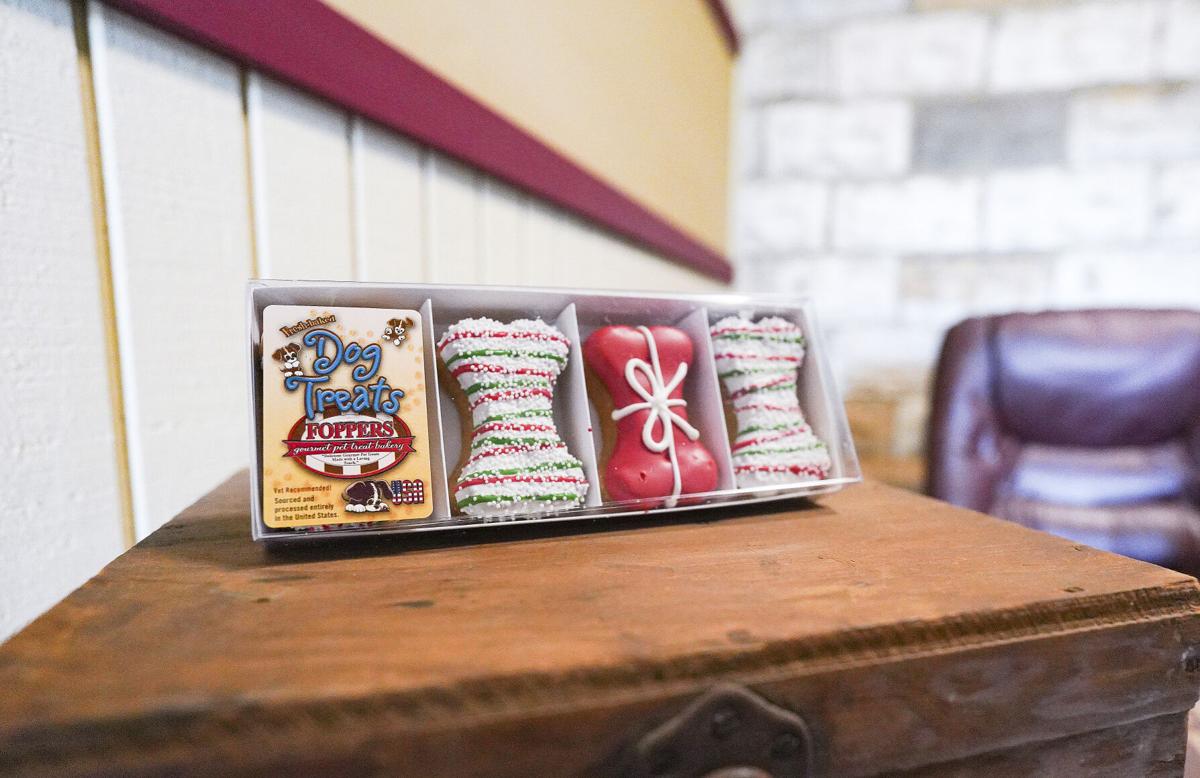 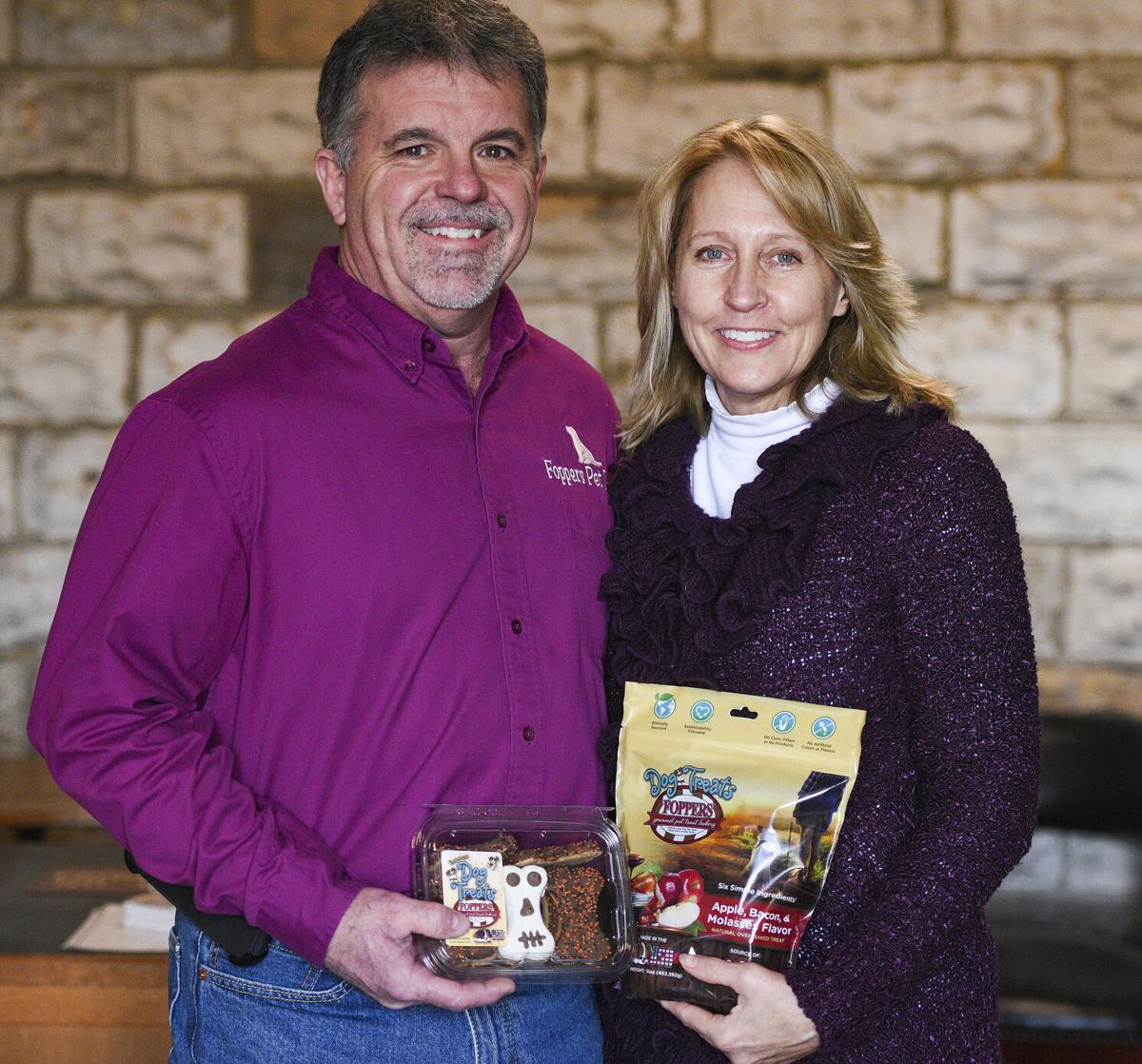 Clark and Michelle Leffert, owners of Foppers Pet Treat Bakery, pose at one of their production plants on Wednesday, Jan. 20, 2021, in Logansport. 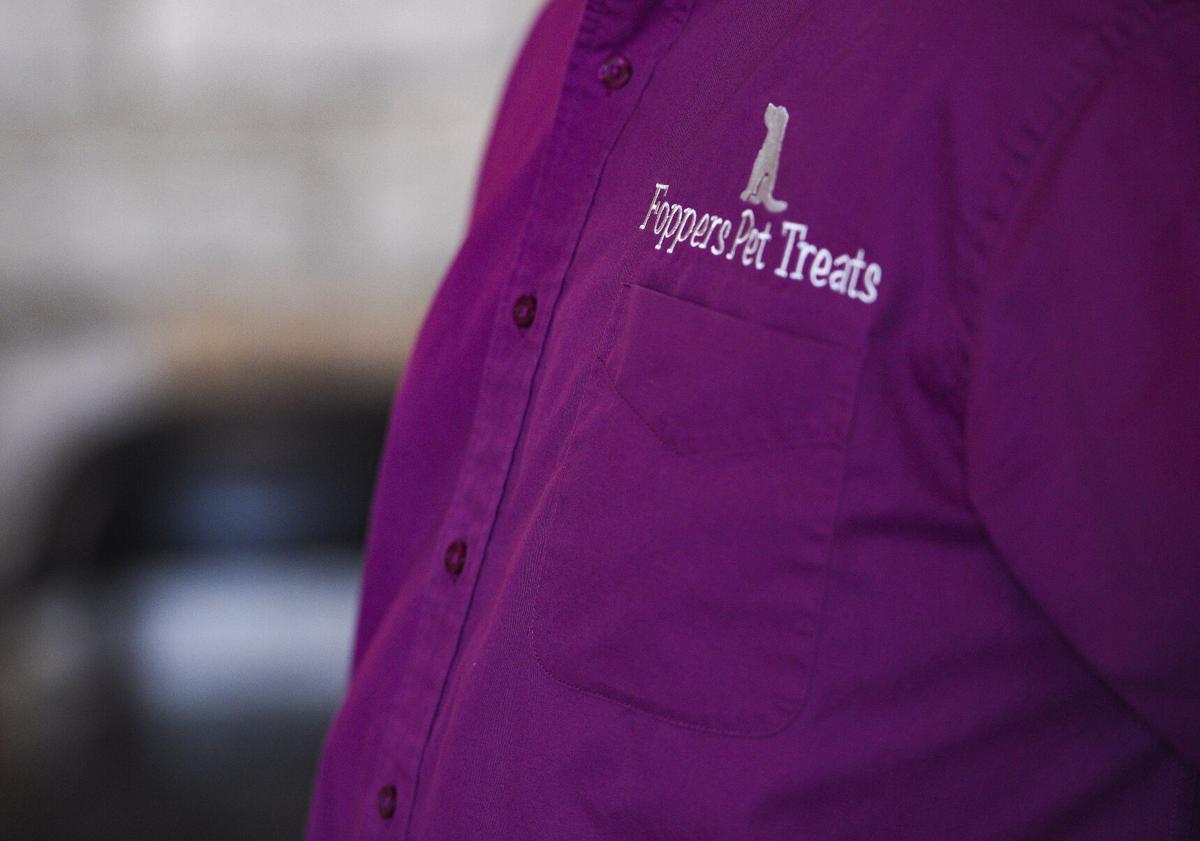 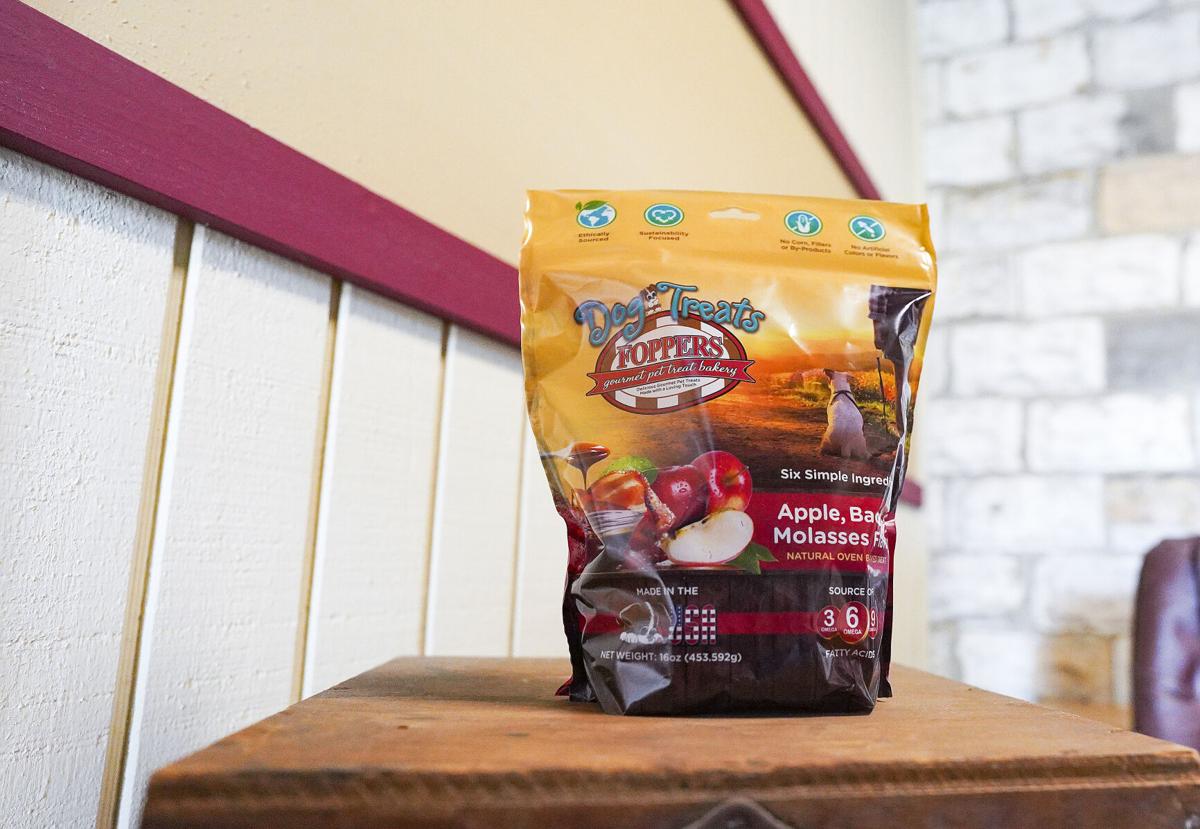 Dog biscuits from Foppers Pet Treat Bakery, pictured on Wednesday, Jan. 20, 2021, in Logansport. A variation of this product will be stocked at hundreds of Walmart locations. 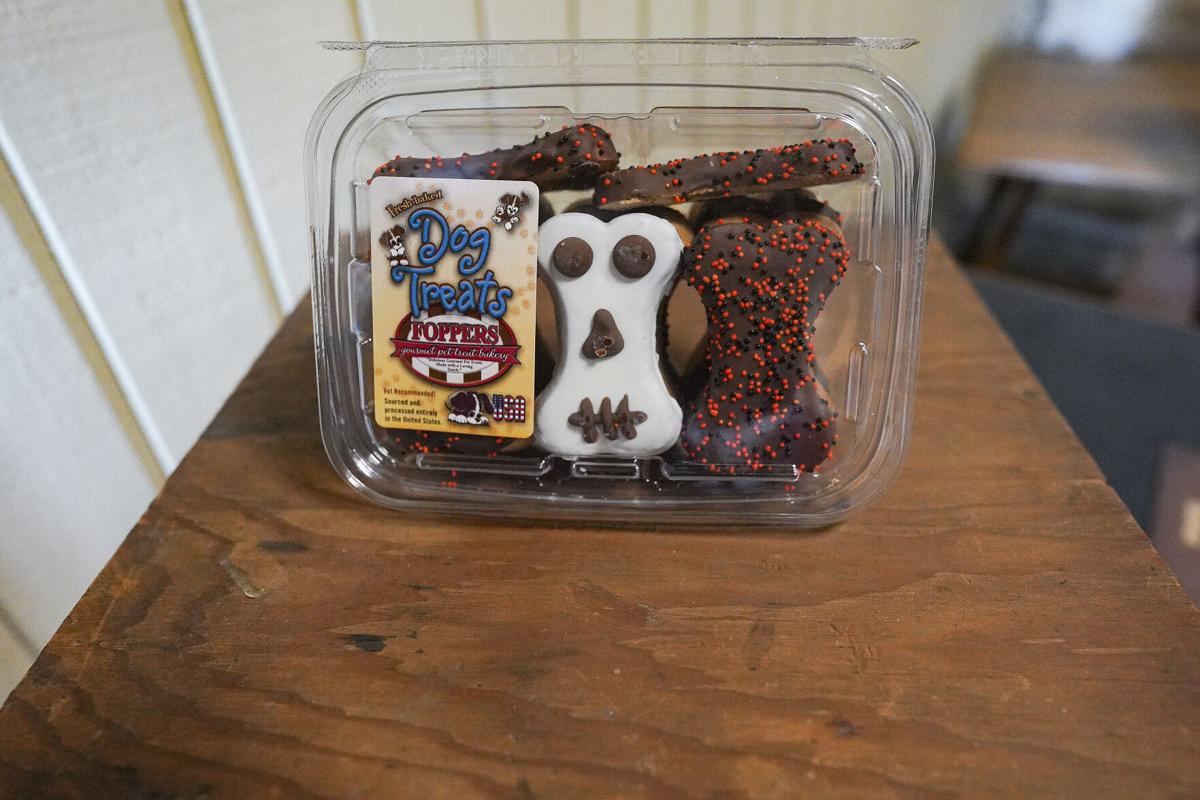 Michelle and Clark Leffert, owners of Foppers Pet Treats Bakery, pose at one of their production sites on Wednesday, Jan. 20, 2021, in Logansport.

Clark and Michelle Leffert, owners of Foppers Pet Treat Bakery, pose at one of their production plants on Wednesday, Jan. 20, 2021, in Logansport.

Dog biscuits from Foppers Pet Treat Bakery, pictured on Wednesday, Jan. 20, 2021, in Logansport. A variation of this product will be stocked at hundreds of Walmart locations.

Clark Leffert had just finished the negotiations for a second building for Foppers Gourmet Pet Treat Bakery when his wife, Michelle, called him in Logansport from Bentonville, Arkansas, with the good news.

Michelle said their realization was what Police Chief Martin Brody said in the movie “Jaws”: “you’re going to need a bigger boat.”

This fall, the warehouse part of Fopper’s #2 on Park Street and northwest of Foppers #1 at 1005 W. Broadway was completely full with both everyday and seasonal orders.

In November, they were already being asked by retailers what their 2021 holiday season items will be, and seasonal item sales are picking up, too.

Based on that and good feedback for 2020 holiday items and orders already for this year’s holiday season, they expect to be stronger this year.

It hasn’t all been about Walmart, but that was a push to a new direction and growth for the 16-year-old company that started as a home-based business for her.

“Without a large company like Walmart, it takes a while to get in,” Clark said.

With retailers, “some of them have an approach that they’re too big for you,” he said. “Where Walmart had helped the most is it kind of put the competition on notice that Foppers can handle it.”

Michelle said that because of the Walmart’s buyers and those at the retailer mentoring the chosen companies, the Lefferts learned about supplier portals.

“It really helps and gives you a whole new dimension on dealing with those levels with lots of stores,” said Michelle.

They also have two items in Dollar Trees, which they’ve seen in Logansport but not in stock — she’s hoping it’s because they run out.

They got in there because a buyer for another company that switched there and reached out to them.

“She really liked what we have to offer,” said Michelle.

“It’s continuing to multiply,” he said.

The plan after 2019’s acceptance was to be in Walmart stores in 2020, and despite pandemic restrictions, it’s been happening.

Beginning this April, they’ll have the treats themselves in 412 Walmart stores.

Walmart decides which stores will carry them, and to see one of their products on the shelves, the Lefferts had to drive to LaPorte.

Their success wasn’t all dependent on Walmart, though.

They’d already laid the groundwork to be picked up by bigger retailers, including Walmart, with applying for the Global Food Safety Initiative and being a certified pet food manufacturer with yearly audits.

“That has really paid dividends to us,” Clark said.

Clark said it’s “not just a safety aspect but are you treating your people right.”

Michelle said that Walmart and other retail chains look for that.

And it was never intended to become a major industrial business.

In 2004, the couple was looking for something she could operate from their home in Lafayette and stay at home with the kids.

She went on the internet and found a Florida retail shop that named their all-natural treats after their dogs, Flopsy and Pepper

So it’s not named after their dog, Holly, who died in 2012, but “she’s the reason we bought it,” Michelle said.

They kept the treats, and Michelle started in their home with a double stack oven that cooked 10 trays at a time, and she cut everything by hand.

Then they leased some industrial space in Lafayette for five years.

It was just the plain biscuits and not the yogurt-coated ones then, and they’ve tweaked the recipe over time.

Now they have a capacity of 600 trays at a time, Clark said.

The couple moved to Logansport in 2017, and Foppers remains a family organization with both their daughters and son-in-law working there.

For the future, they want to stay in Logansport and may end up hiring a logistics firm if expansion requires it.

The couple is considering making additions to the Park Avenue building, too.

They want to keep the storage as much on their site to avoid problems like contamination, said Clark.

That’s to keep at present levels.

“Going to the next level is going to take a lot of automation,” she said.

But they will make it grow.

“We’re still pushing forward, and we’ll keep doing it,” she said. “We’re having fun still, and that’s the main thing.”

It’s been like watching a child grow, she said.

Foppers is also hiring now because of its consistent growth.

They’re looking for about 16 to 39 people, Clark said.