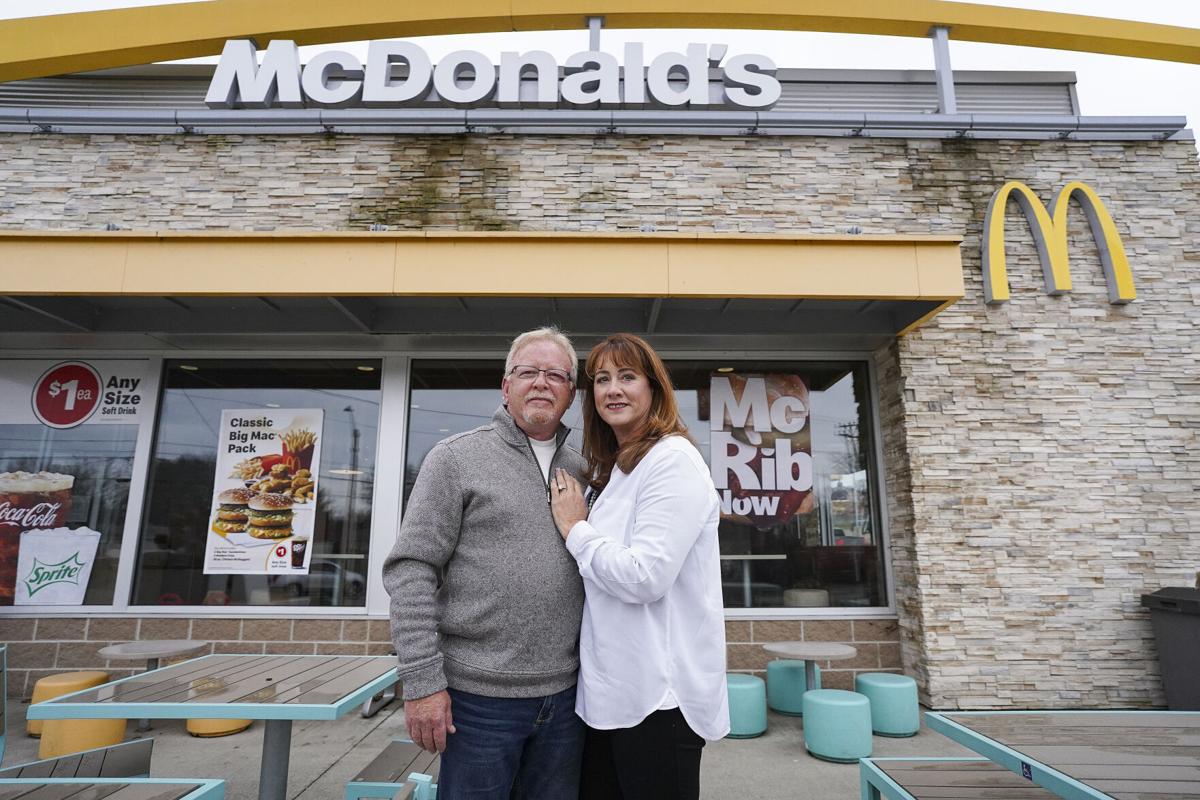 Patricia and Mark Hammons pose outside the McDonald’s they own at 3201 E. Market St. on Wednesday, Jan. 6, 2021 in Logansport. 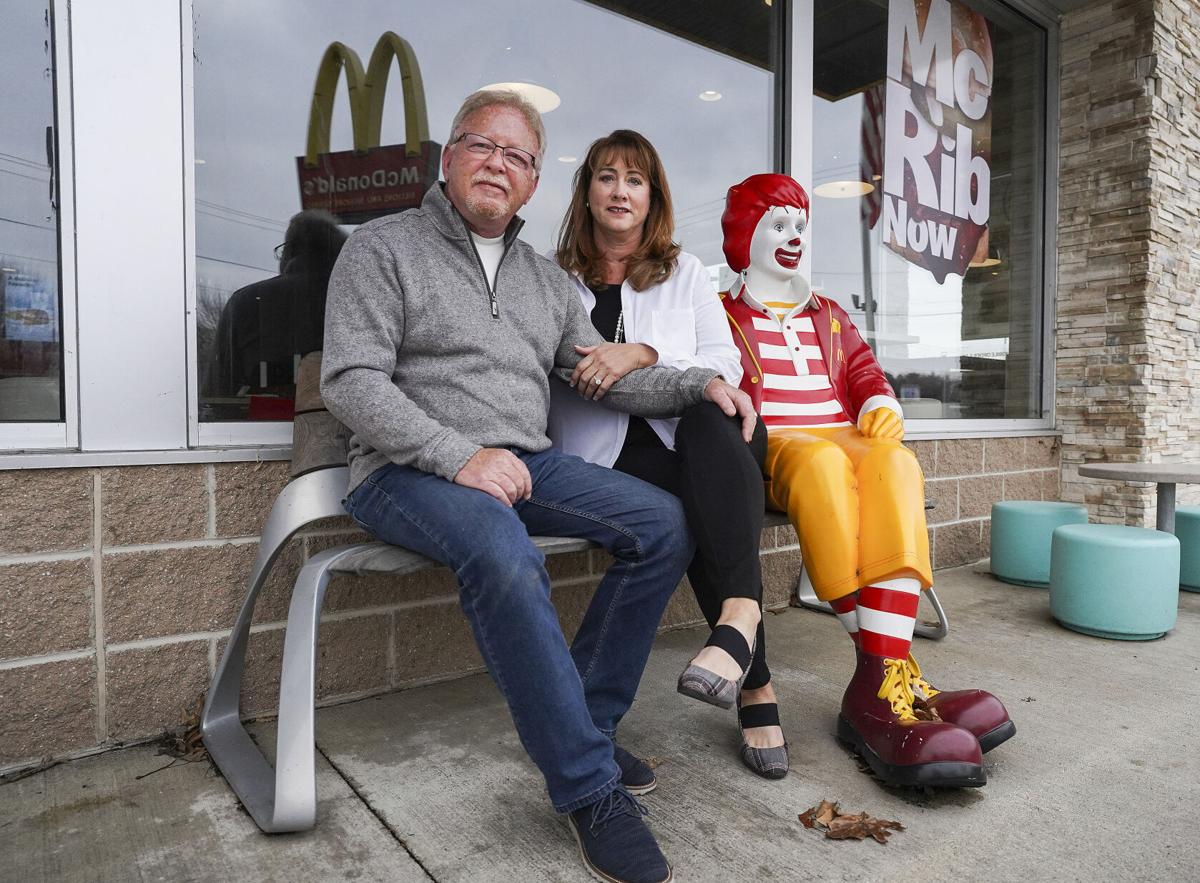 Mark and Patricia Hammons pose on a bench with a Ronald McDonald statue on Wednesday, Jan. 6, 2021 in Logansport. The pair decided to sell the five McDonald’s locations they own.

Patricia and Mark Hammons pose outside the McDonald’s they own at 3201 E. Market St. on Wednesday, Jan. 6, 2021 in Logansport.

Mark and Patricia Hammons pose on a bench with a Ronald McDonald statue on Wednesday, Jan. 6, 2021 in Logansport. The pair decided to sell the five McDonald’s locations they own.

The Hammonses were presented with a golden opportunity two decades ago, and they’ve been fortunate enough to be given another one now.

After owning both Logansport McDonald’s restaurants, along with three others in Delphi, Monticello, and West Lafayette, Mark and Patricia Hammons have made the difficult decision to sell their eateries. “It’s been rough,” Patricia said with tears in her eyes. “I love our crew.”

“I’ve been in this business for 20 years,” said Mark, “but she’s been in this for 40 years. It’s hard enough leaving a job … I can’t image leaving after that many years.”

But he’s standing by his wife, offering any support she may need. It’s a struggle for them both, but Mark knows Patricia will be saying goodbye to an establishment that has been a part of her life since she was a teenager.

Starting as a crew member while residing in Swanton, Ohio, she eventually worked her way up the corporate ladder. From an hourly manager to a manager, from a supervisor to an executive-level employee who oversaw 25 operators and more than 100 restaurants within the Chicago area, Patricia knows the ins-and-outs of the restaurant business.

So, when she and Mark recognized the challenges of raising children in the Illinois city, they opted to search for a new venture. That venture led them to Logansport. Mark left the health care field, where he often traveled the globe.

And the couple purchased the local restaurants in 2000. Six years later, they acquired the McDonald’s in Delphi followed by the one in Monticello in 2007, later buying one in West Lafayette.

“It was a frightening time,” said Mark, explaining that knowing that they would be taking a chance on a million-dollar deal raised some fear. “Neither one of us came from money,” he said.

“We were both born poor,” Patricia added.

“So we did things the hard way,” he chimed in. “We saved and we thought a lot about our future. We found a point where we could buy two restaurants. But when you sign a document for millions of dollars … it’s frightening.”

But it was a decision neither has ever regretted.

“Of all the places we could have gone, we ended up in Logansport, and it has been a great place to raise our children,” said Mark. “It’s been a blessing.”

Patricia agreed, adding that every employee from their five locations has become family. Their customers have become family. And it’s because of their family that they have chosen not to leave the community.

However, it’s also a bit because of family that they are leaving their business.

COVID hit people hard, said Patricia, who witnessed employees suffering the loss of loved ones. A manager, for example, lost his father.

And seeing how the virus has impacted society has made the Hammones want to spend more time with their children, Caitlyn Darlage, who resides in Shelbyville, and Jonathon Hammons, who lives in Logansport. The couple also desires to be on “grandparent duty” to their two grandchildren.

“We’ve worked hard and we want to enjoy the fruits of our labor,” she said.

But they will never forget the way the McDonald’s staff came together to support each other time and time again. Whether it was a Thanksgiving Day dinner where Patricia baked three turkeys with all the trimmings or a Christmas event where individuals staying at Emmaus Mission Center were transported to McDonald’s for a meal and a visit with Santa Claus, along with musical entertainment by fellow Logansport First United Methodist Church congregation members, she remains amazed at the caring her employees have shown to each other.

So when they were unable to host a Christmas party for the employees in 2020, it broke Patricia’s heart. “We didn’t want to put people at risk.”

Yet, the threat of the virus never stopped the couple from helping their crew members. When someone was quarantined, they made sure that person’s family had food, whether that meant taking bags of McDonald’s sandwiches and fries or buying supplies from Martin’s or Wal-Mart. They would deliver the goods to the employees’ homes and make an outside exchange so everyone maintained social distance safety requirements.

“We have gotten to know everyone, and they have become family,” Patricia reiterated, admitting that COVID was a trigger in deciding to step aside from their restaurants. Not being able to welcome their regular customers into the lobby has been difficult, the couple agreed, saying they wish they had a way to thank everyone personally for the patronage over the years.

“And I never wanted to be around when McDonald’s got off of the $1 soft drinks, so I’ll be glad to get out before that change,” said Patricia, releasing a sigh as she contemplated her future where there will be no more 5 a.m. opening hours or 12:30 a.m. training sessions on how to close a restaurant.

Instead, she will be relaxing for a while, enjoying her grandbabies, and then possibly delving into some theater work. Mark would like travel with his wife and focus on his vast array of hobbies.

And come Wednesday, Jan. 13, they will set out to accomplish those goals. That’s the date the new owner, Dean DiMichele, will take over the helm.

Coming from Little Rock, Ark., DiMichele has sold five restaurants he owned in order to acquire a total of 13 Indiana-based eateries, including all five of the Hammones’ McDonald’s.

The entire transaction has been a blessing, said Mark, acknowledging that the couple began working on the sale of the properties in June of 2020. With less than one week to go, they wish to extend their gratitude to everyone for their continued business over the years. “Thank you to everyone who stopped by and who came in,” said Mark. “And we thank God for sending us to Logansport. It has been a blessing, indeed.”