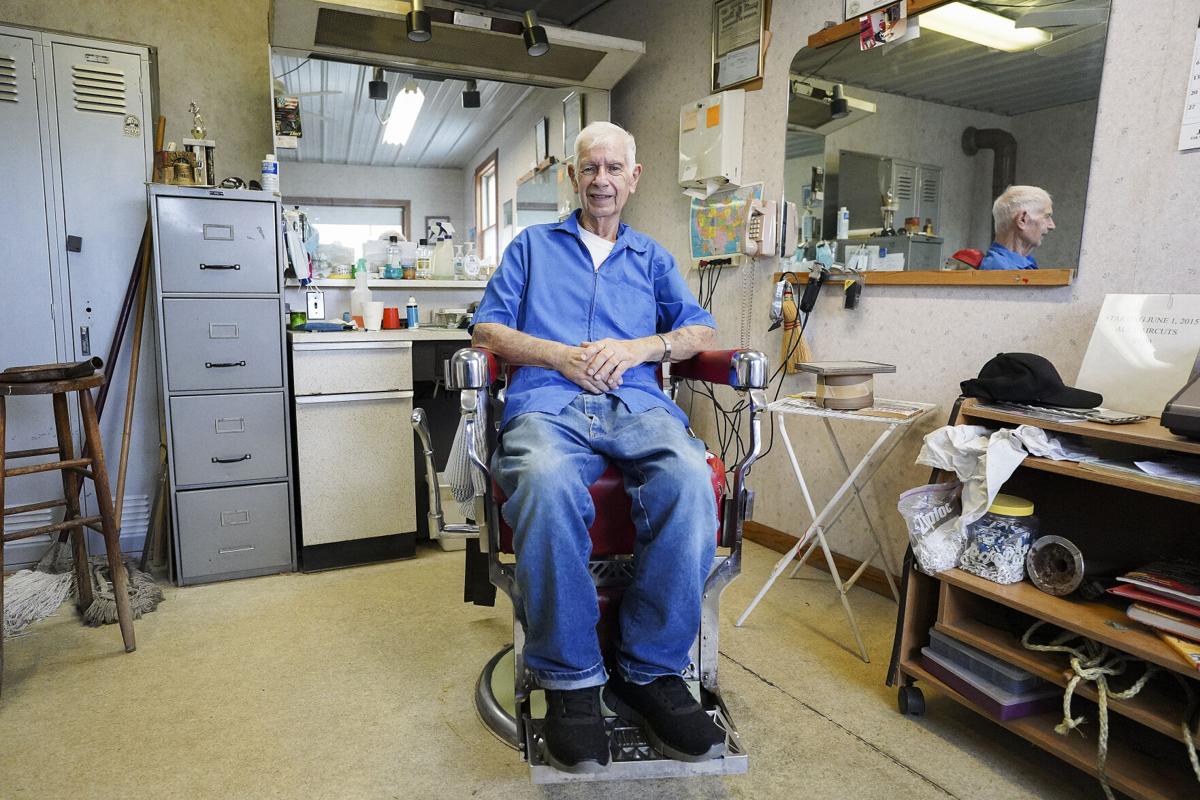 Junior Swartzell sits in his barber chair with his work uniform on Wednesday, Jan. 6, 2021, in Royal Center. Swartzell has been cutting hair for 60 years and is slowly starting to wind down his business. “The grandkids will keep me busy,” he said when asked what he’ll do. 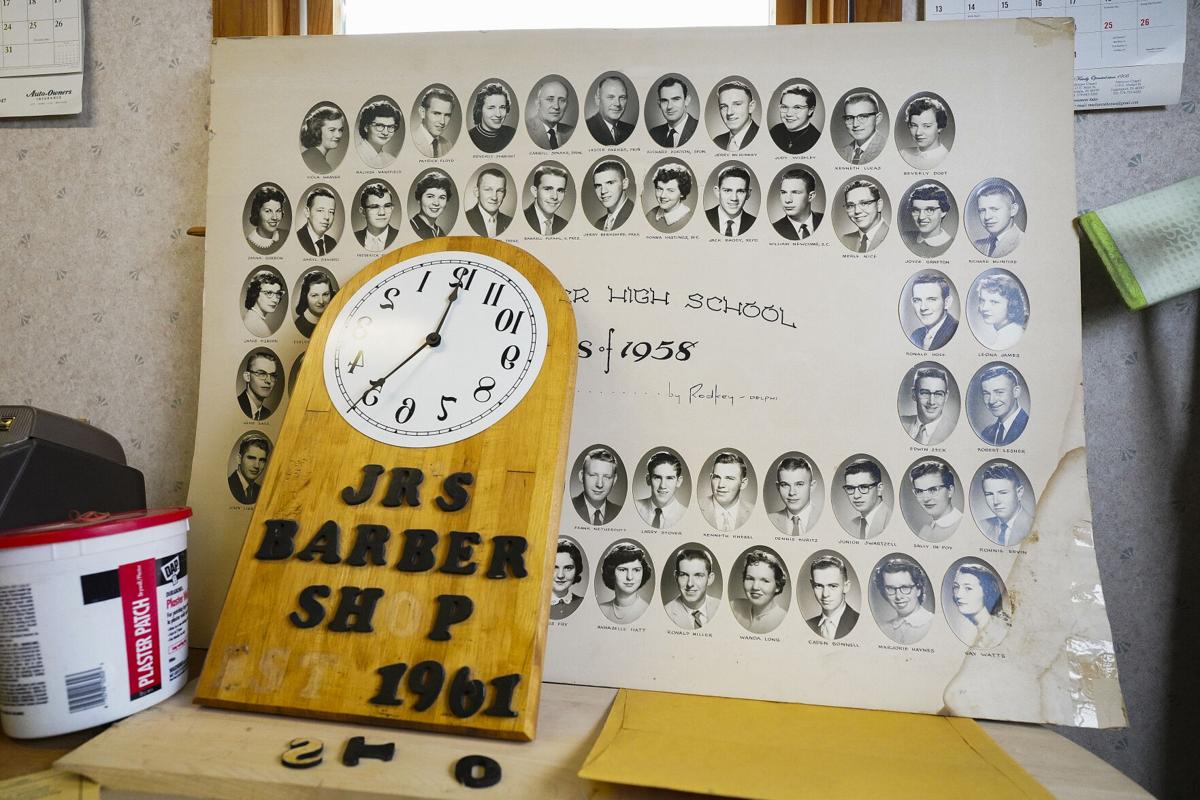 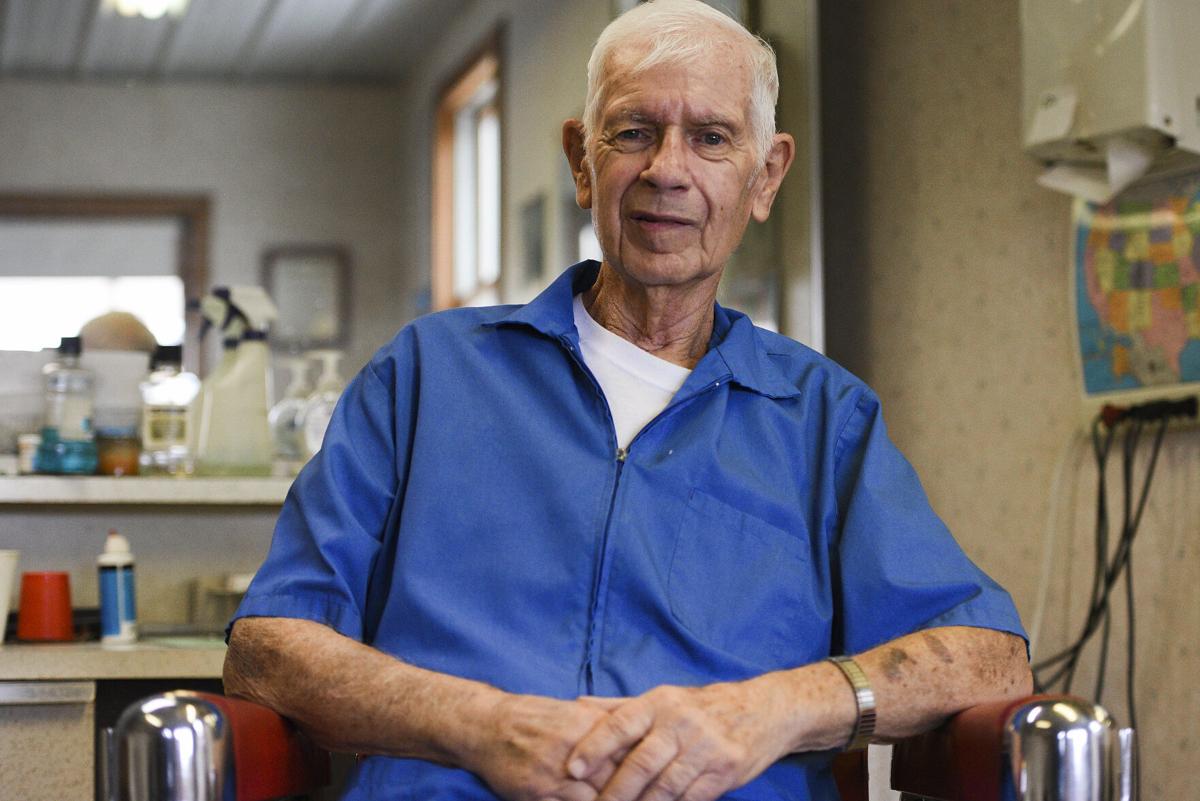 Junior Swartzell poses in the barber chair at his shop on Wednesday, Jan. 6, 2021 in Royal Center. Swartzell is retiring after cutting hair for 60 years. 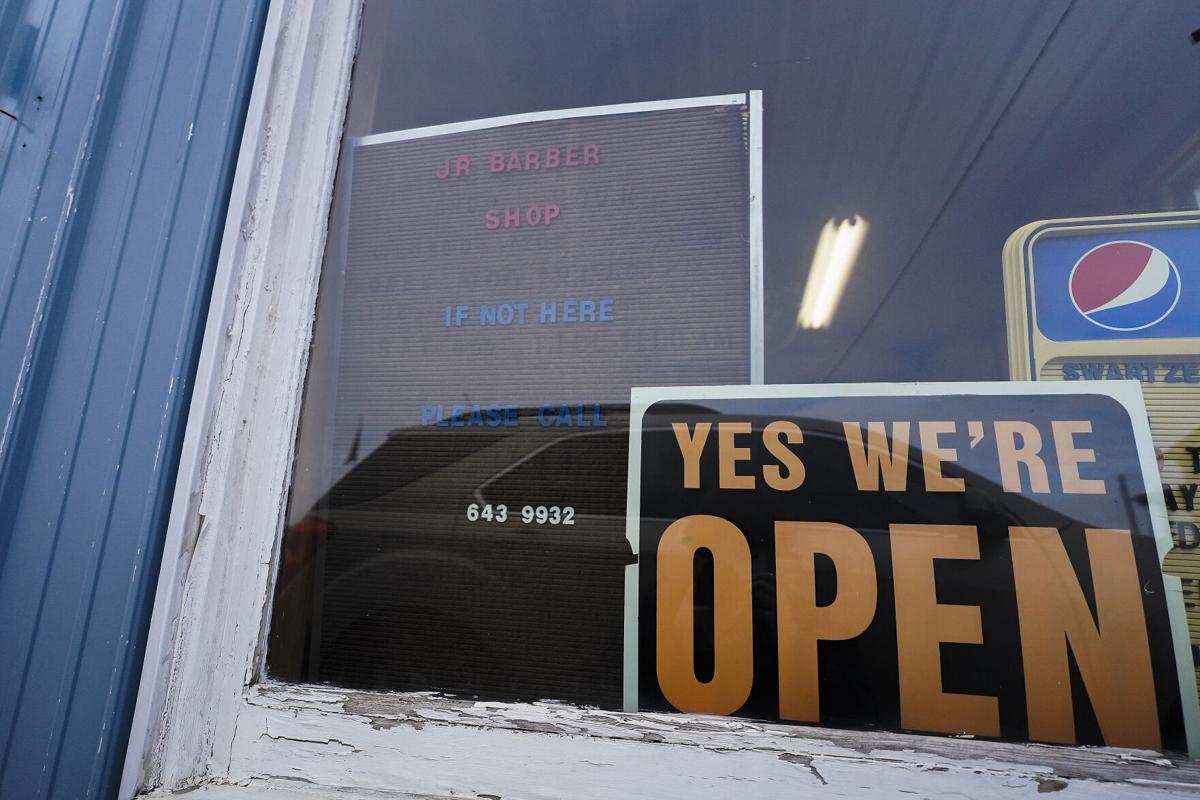 A sign outside of Junior Swartzell’s barber shop asks customers to call if he isn’t there on Wednesday, Jan. 6, 2021, in Royal Center. Swartzell said he likes leaving his number up so he can go eat lunch at home in between appointments.

Junior Swartzell sits in his barber chair with his work uniform on Wednesday, Jan. 6, 2021, in Royal Center. Swartzell has been cutting hair for 60 years and is slowly starting to wind down his business. “The grandkids will keep me busy,” he said when asked what he’ll do.

Junior Swartzell poses in the barber chair at his shop on Wednesday, Jan. 6, 2021 in Royal Center. Swartzell is retiring after cutting hair for 60 years.

A sign outside of Junior Swartzell’s barber shop asks customers to call if he isn’t there on Wednesday, Jan. 6, 2021, in Royal Center. Swartzell said he likes leaving his number up so he can go eat lunch at home in between appointments.

When Junior Swartzell first opened his barbershop 60 years ago, there were three barbers in Royal Center.

He remembers they’d trade haircuts with each other, and Jack Baer would come in and ask him to straighten up his haircut because the “joker” across the street (Baer’s shop) messed it up.

“They were good guys,” the 81-year-old Swartzell said of Baer and Glen Parrish. “They helped me, and I helped them.”

Now, there’ll be no more barbers in Royal Center.

Swartzell has retired, and his home and shop next to it went up for sale and are being closed on.

For the last few years, he’d been the only barber left from Royal Center up to North Judson, he said.

“I’ll miss him,” said Mike Kitchell, who was Swartzell’s sixth customer in Royal Center and has been going back since he was about 14.

There will be a void not just because he’s gone to Swartzell so long but because they’re friends, Kitchell said.

“The old ways are leaving,” he added.

Swartzell grew up on a farm outside of town and graduated in 1958. He went to Indianapolis for barber school and Paul West in Logansport hired him right out of school. He also worked in Kokomo for a bit.

But he always intended to return to Royal Center, and in 1961, he did.

His first shop was downtown, although he later moved to the south, across from Pioneer High School, and had his shop in a small building just outside the family home.

When he started, he charged $1 for a haircut and eventually had four barbers in his shop.

Swartzell still has an original chair, red upholstery and with a matching booster seat for kids.

His customers often started in the booster.

“Mom and dad brought the kids in,” he said. “Most of my customers were young.”

He also did the hair work for the deceased at the funeral home.

“They never complained,” he said with a smile.

He most liked that the work kept him busy.

“The worst day is when you don’t have too many customers,” he said.

He also liked the people — “the majority,” he joked.

Kitchell said Swartzell was “just the typical barber, talked about everything in Royal Center.”

He knew everything happening in the town and knew a little about everything because people would come in and chat about their projects.

“It was fun just to go sit and talk with him,” Kitchell said. “He usually had a good joke — fairly new. He was an easy person to talk to.”

“It was fun to just go sit around with the fellers.”

Dick Roller had been a customer for about 35 years and knew Swartzell since high school.

“He’s just a friendly guy, and I could get right into him, no problem,” said Roller.

Customers would call him, and he’d meet them at the shop, and Roller would often stay a half hour and talk with Swartzell.

Howard Goodrich, who went to him for 35 to 40 years and was in the same church, said, “I’ve just always known him.”

It’s definitely the end of an era, Goodrich said.

Kitchell said, “About all his clientele was repeat.”

He also knew what they liked.

“I didn’t have to tell him,” Kitchell said. “I sat down in the chair, he trimmed it and it was over.”

During the harvest season, Swartzell took customers up to 10 p.m.

“They’d work in the field until dark,” he said. “You knew they’re going to be coming. You expect it.”

On occasion, he’d have his dinner behind the chair while working.

Towards the end, some customers drove their lawnmowers in, and some he picked up and drove back home.

But over the years, fewer people just dropped in, especially in the last year, he said.

His son Brad Swartzell said that they joke that his daughter-in-law, Rashel Swartzell, has been taking his business with her Shear Design down the street.

Regular customers still came, including a few from Indianapolis.

They were salesmen and would stop on their way to Michigan City or northern towns, Swartzell said.

Besides being a barber, Swartzell was also on the town council in the 1970s and coached youth baseball when his three sons were in it.

He also drove school buses, getting up at 5 a.m. to start, going to his barber shop to work, driving the kids home, eating dinner and then working as school custodian.

“He was always timely for the kids, and you always felt like he’d take care of them,” said Casey Davenport, whose kids graduated in the first decade of this century.

He gave families his number in case the kids weren’t using the bus that day or something changed.

“You don’t have that too often,” she said.

Swartzell said when he was custodian, “I knew every kid in school.”

He was at every sporting event, and when someone forgot their homework, he had the key to let them in to get it.

Swartzell said he’s still not quite ready to close shop.

He plans to cut some hair part-time, and he’s taking his old barber chair with him.

“I’m going to slow down some, once I get established again,” he said.

But mostly, his grandkids keep him busy, he added.