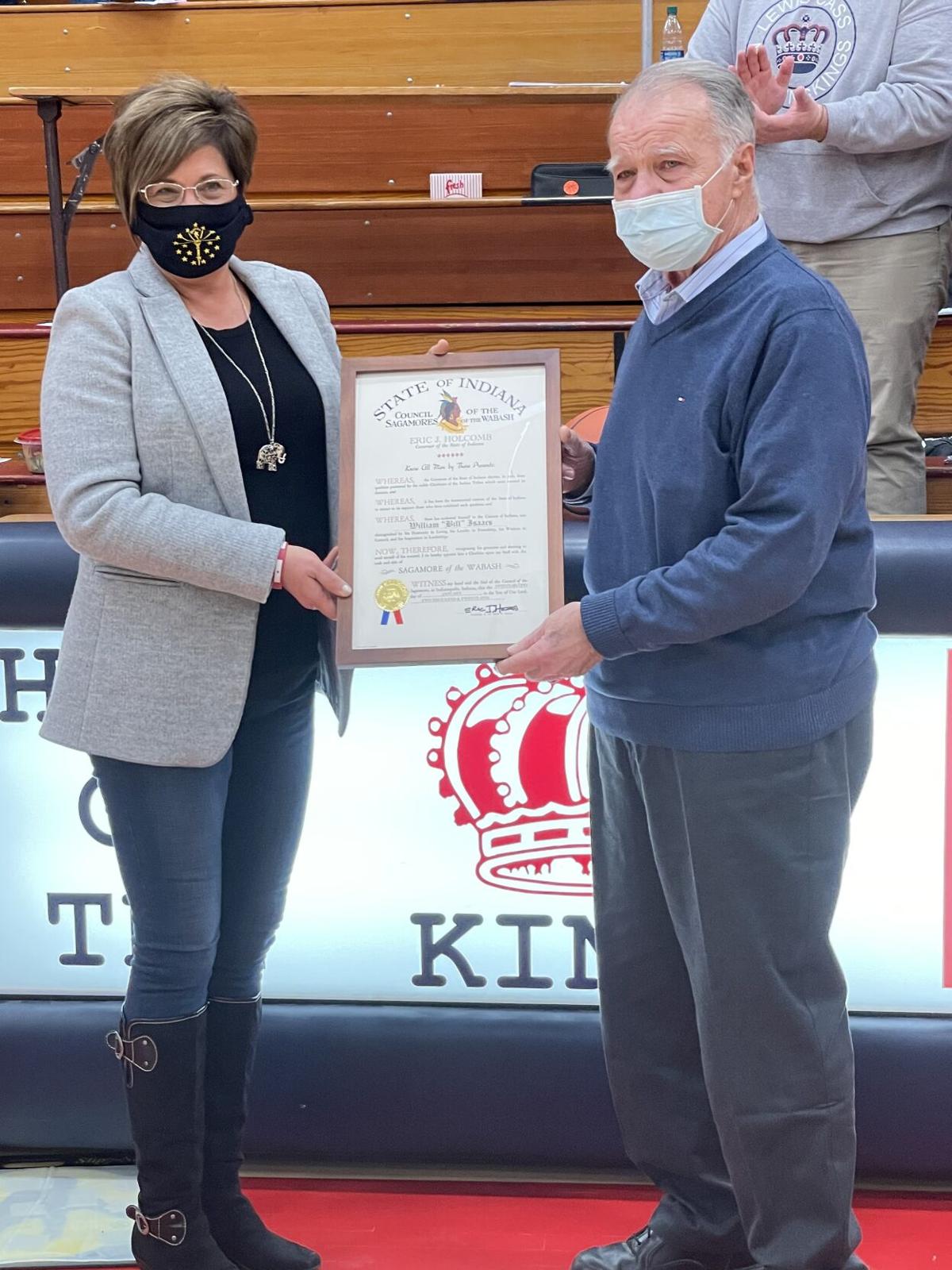 Bill Isaacs receives the Sagamore of the Wabash award from state Sen. Stacey Donato last week during halftime of the Lewis Cass-Northwestern boys basketball game. Isaacs, 76, was the principal at Lewis Cass High School for 22 years before retiring in 2012. 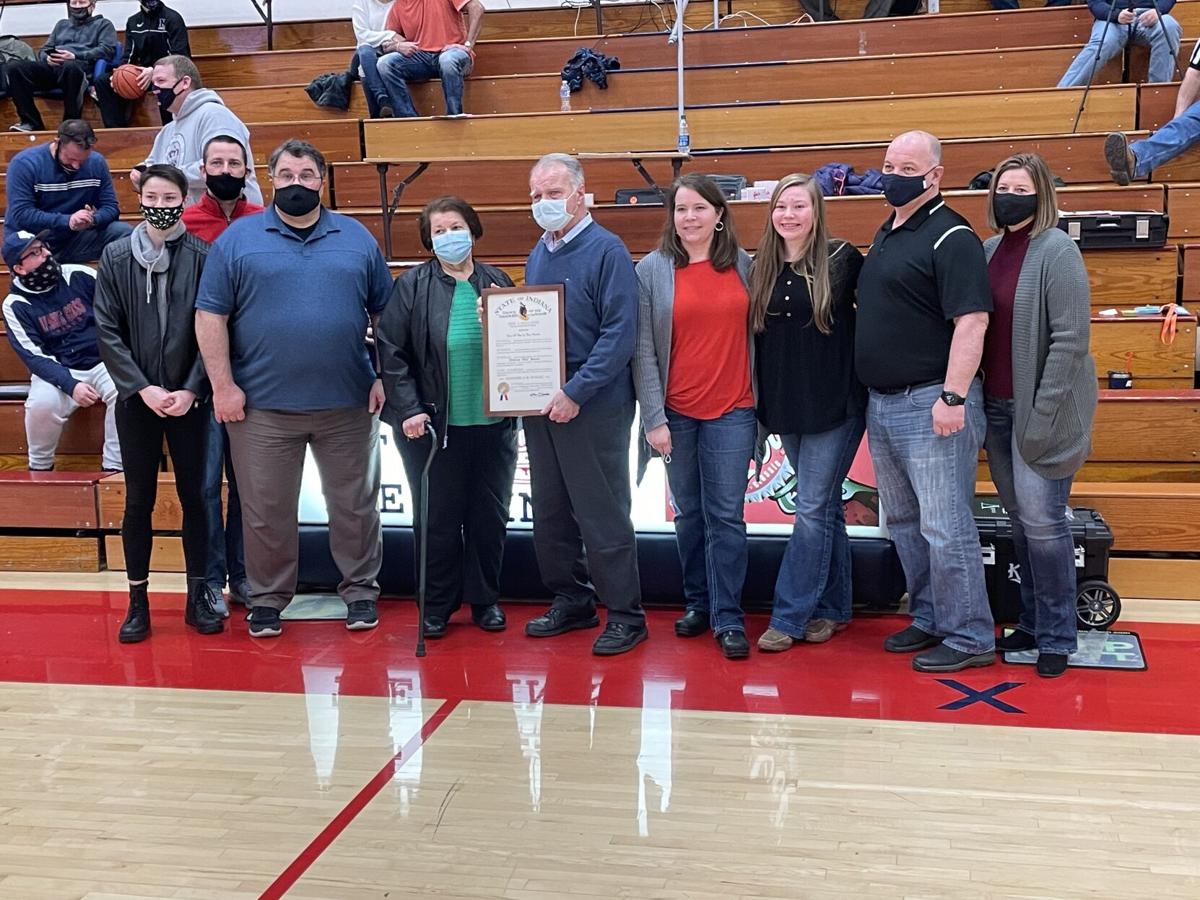 Bill Isaacs, center, holds the Sagamore of the Wabash award as he poses with his family for photos last week during halftime of the Lewis Cass-Northwestern boys basketball game.

Bill Isaacs receives the Sagamore of the Wabash award from state Sen. Stacey Donato last week during halftime of the Lewis Cass-Northwestern boys basketball game. Isaacs, 76, was the principal at Lewis Cass High School for 22 years before retiring in 2012.

Bill Isaacs, center, holds the Sagamore of the Wabash award as he poses with his family for photos last week during halftime of the Lewis Cass-Northwestern boys basketball game.

Isaacs was honored with the Sagamore of the Wabash award. State Senator Stacey Donato, a Lewis Cass grad, presented Isaacs with the award.

Isaacs, 76, Walton, was the principal at Lewis Cass High School for 22 years before retiring in 2012.

A statement written by Cass athletic director Greg Marschand was read during the presentation. It stated:

“Your love for Lewis Cass, the students, the staff and the community is extraordinary and very much abided. Thank you so much for the Christian man that you are, the friendly human being and the endless support you have given to all activities and programs here at Lewis Cass and our entire community. Your wisdom, leadership and advice you have given and provided is very much appreciated and will never be forgotten. Bill Isaacs, thank you for the very special service you have provided and for being the face of Lewis Cass High School.”

Isaacs was not expecting to receive the award as it was kept as a surprise from him.

“I’m just shocked,” he said. “I never dreamed anything like that. It’s very much appreciated and all I can say is it’s such a great community and that’s where all the credit goes to, all the kids.”

Isaacs was hired to be the principal at Lewis Cass in 1990.

“I grew up in southern Indiana down in Jackson County. The biggest town is Seymour. I coached down there for seven and a half years,” he said. “Then I went to Tri-County High School, I was there for 16 years, 13 as an administrator. I coached for a lot of years. I came here in 1990 and have been here ever since. I’ve been retired for nine years now, it doesn’t seem that way. It’s amazing.”

Isaacs has found a home at Lewis Cass.

“There’s just such great people here, that’s a lot of the credit,” he said.

Isaacs is still a mainstay at Lewis Cass events.

“I still love being around the kids. It makes it worthwhile and it’s just a great community. I’ve been so blessed by God that it’s hard to describe,” he said.

Isaacs and his wife, Linda, have two sons and two daughters.

Their granddaughter, Hannah Redlin, was the state champion in the discus in 2019 as a junior while throwing for Rensselaer. She was named Miss Field Event last year, although her senior season was canceled due to COVID-19. She is now a freshman member of the track team at Indiana State University.

The Sagamore of the Wabash award was created during the term of Governor Ralph Gates, who served from 1945 to 1949.

The term “sagamore” was used by the American Indian Tribes of the northeastern United States to describe a lesser chief or a great man among the tribe to whom the true chief would look for wisdom and advice.

The award is one of the highest honors which the Governor of Indiana bestows. It is a personal tribute usually given to those who have rendered a distinguished service to the state or to the governor. Among these who have received Sagamores have been astronauts, presidents, ambassadors, artists, musicians, politicians and ordinary citizens who have contributed greatly to our Hoosier heritage.

The award states that the honoree is “distinguished by his (her) humanity in living, his loyalty in friendship, his wisdom in council, and his inspiration in leadership.”