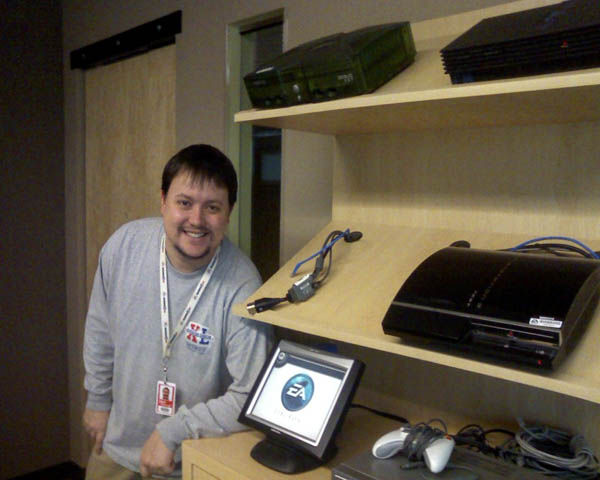 GAME BUSTER: Logansport graduate Dave Packard, a quality assurance tester for EA SPORTS, poses for a picture with gaming equipment. Packard, who has been a fan of video games for as long as he remembers, found his dream job after moving to Orlando, Fla. 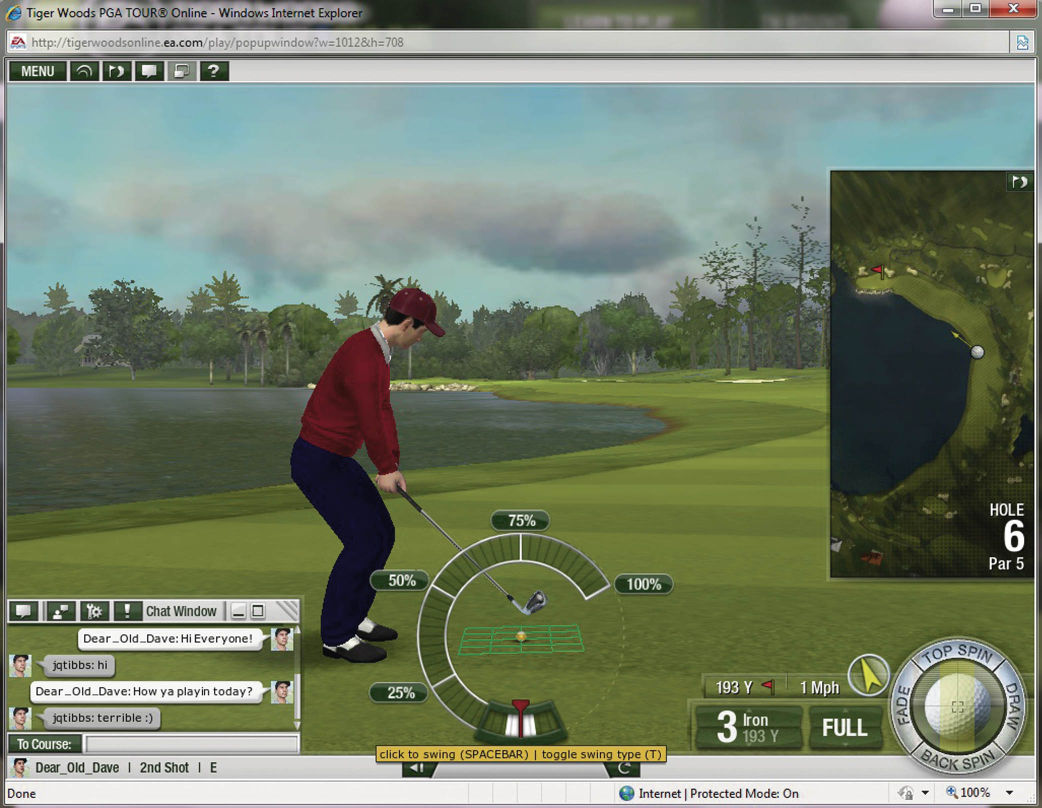 SHARING WITH OTHERS: EA SPORTS Quality assurance tester Dave Packard, recently worked on testing the Tiger Woods Online game. This is a screenshot of the golfer at address before the shot. A chat window on the lower left-hand side of the screen allows players to talk to one another while playing. 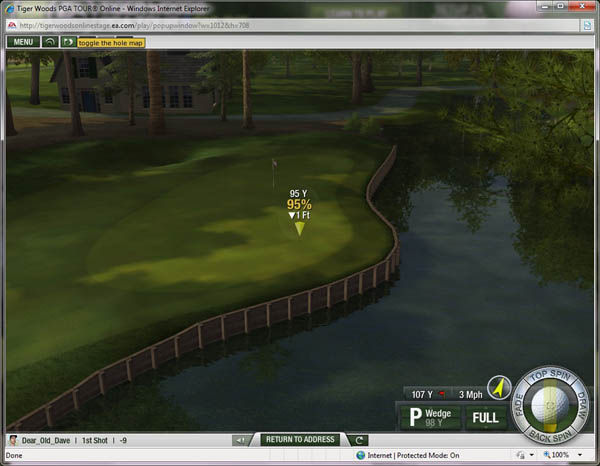 FORE: Dave Packard recently finished testing the newly released Tiger Woods Online game. Here is a screenshot of the game when zoomed in to aim a shot.

GAME BUSTER: Logansport graduate Dave Packard, a quality assurance tester for EA SPORTS, poses for a picture with gaming equipment. Packard, who has been a fan of video games for as long as he remembers, found his dream job after moving to Orlando, Fla.

SHARING WITH OTHERS: EA SPORTS Quality assurance tester Dave Packard, recently worked on testing the Tiger Woods Online game. This is a screenshot of the golfer at address before the shot. A chat window on the lower left-hand side of the screen allows players to talk to one another while playing.

FORE: Dave Packard recently finished testing the newly released Tiger Woods Online game. Here is a screenshot of the game when zoomed in to aim a shot.

For most young people, playing video games is a fun way to pass time and complete some type of conquest.

“I’ve been a game-lover since I opened the original Nintendo on Christmas of its release in 1985 or 1986,” he recalled.

He credits his dad, Dave Packard, who runs Packard Insurance, for changing his life forever.

Packard has worked at EA SPORTS for three years in Orlando.

“People I know are not surprised when they find out where I work and consider it destiny,” he said. “I did imagine having this job, but I never expected it to really happen. I remember wanting to be a tester for Nintendo as a kid. ... Anyone who knows me would put me in the ‘Most likely to become a video game tester’ category.”

Finding his dream job occurred after a move to Orlando when he discovered an opening at EA SPORTS. After applying online, he finally received the phone call he had been hoping for several months later.

His official title is Quality Assurance Tester and he works with the development team. The Orlando studio is just one of several existing in North America, Packard explained. The studio focuses on Madden, Tiger, NCAA Football, and a few other games.

His job requires him to find and report any possible bugs the games have, before the release.

“We need to make sure that the game operates as the programmers intend it to,” he explained. “We let the development team know what is not working as intended in the game, they fix it, and then we test that fix to make sure it works without problems. I spend a lot of time in our Bug Database reporting and keeping track of bugs that need fixing.”

To Packard, the job doesn’t always feel like a job.

“It’s really a labor of love,” he said. “Don’t get me wrong, it feels like a job everyday — just one that I love.”

He enjoys being able to commit so much time to games and reads the reviews on the game before it comes out. However, he admitted it is strange playing the game when it is available for purchase, since he knows what to expect.

“It’s more nostalgic, but the games are still fun,” he said.

In addition to testing, Packard also performs database management, creates reports for management, assists other testers in multi-user testing and attends meetings with developers and programmers to talk about game issues.

While it may all sound like fun and games, it’s not.

“It is quite more complicated and busy than most expect,” said Packard. “All my friends say ‘Ha Ha, it must be hard playing games all day’ or something to that effect, but I test games, not play them. There is quite a difference.”

He explained in order to fix any problems, programmers need to change the computer code. The code is complex, which means any change can potentially cause problems in other parts of the game. This requires thorough testing daily, to guarantee a consumer-ready product.

Packard has tested games for several systems including Wii, XBOX 360, Play Station 3 and PC. He usually focuses on one system per project.

Packard’s name can be found in the credits of Tiger Woods 2009 and 2010 for the Wii, Madden 2010 for the XBOX 360 and Play Station 3, and Tiger Woods Online, which is his most current project. He’s also tested the brand new Madden Ultimate Team, which is an add on for Madden 2010. He’s also lent support for other EA studio games, including The Saboteur and Army of TWO: The 40th Day.

Testing recently began on Tiger Wii 2011, which is expected to be released by summer, he said.

Packard was excited to see the release of Tiger Woods Online on April 6. The newest game can be played on the Internet, without any heavy downloading.

“It is really a new frontier for us, bringing the consumer a product directly over the Internet like we are,” he said. “You can play it everywhere and it looks great.”

He explained players can access the game instantly by logging on and can save golf rounds at home and finish it elsewhere. Players can also chat with others and see another player’s shot flying across the screen while playing the same hole.

When playing Tiger Woods Online, people are paying for a live video game, which changes over the year. New features and courses are added and there’s no wait for the new game. Testers also interact with the users in forums and on in-game chat, for input.

“I never dreamed as a consumer, I could share a gaming experience with the game company and developers in the way we are trying,” he said. “It’s exciting and may be the future.”

Packard also encourages everyone to try out a free version of the game at TigerWoodsOnline.com. He said others may even see him online.

As for downsides to the job, Packard doesn’t feel there are any out of the ordinary.

“Just the downsides that other jobs have,” he added. “Long hours sometimes, promotion seeking, printer jams —  all the basics. But it’s video games, so I’m in heaven.”

His favorite part is making a difference.

“I’ve loved games all my life,” he said. “I have a degree in Film/TV production. I really believe in quality of the entertainment your name is on and how entertainment as an experience can enrich people’s lives.”

• Denise Massie is a staff writer at the Pharos-Tribune. She can be reached at 574-732-5151 or denise.massie@pharostribune.com

Bishop, Marjorie L., 93, of Logansport, a private family service will be conducted with interment in Mount Hope Cemetery. Kroeger Funeral Home is in charge of arrangements.

Evan A. Crawley passed away Oct. 22, 2020, at Logansport Memorial Hospital due to complications of coronavirus. He was 86. Memorial services are scheduled 11:30 a.m. Thursday, Oct. 29 at Trinity Lutheran Church, 97 E. Market St.